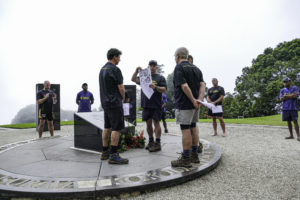 On last years July trek, the Bodin family made a touching tribute to their great uncle, Private Daniel Ousely from the 2/22nd Battalion. They spoke of his legacy and presented photos of this strapping 23 year old young man. Daniel was a victim of the horrific massacre that took place at the Tol Plantation. An account of the atrocity is presented below:

Rabaul was the capital of Australian-mandated New Guinea and was protected by a tiny garrison consisting mainly of the 2/22nd Australian Bn – “Lark Force”.

The town was quickly routed by a massive Japanese fleet of carriers, destroyers, submarines and fighter and bomber aircraft. When the order “every man for himself” was given, soldiers and civilians fanned out over New Britain looking for escape routes through the most rugged terrain imaginable.

Some endured an epic trek through dense jungle, battling malaria, dysentery, tropical ulcers, leeches, exhaustion, malnutrition and crocodile-infested rivers, to eventually reach points where they were able to escape on small boats.

But this was not the majority, including those who reached Tol Plantation hoping to be rescued.To their horror, five barge-loads of Japanese troops were on the beach to meet them.

There was no option for the starving, exhausted, virtually unarmed Australians but to surrender. At first it seemed they would be treated as normal PoW’s. Then an order to execute the PoW’s was given. Red Cross brassards were ripped off medics. Men were trussed together in small groups with fishing line or ropes and taken into the jungle and slaughtered.

They stood or sat listening to their mates’ death cries, awaiting their own fate by blade or bullet. The few survivors told of grinning Japanese soldiers emerging from the bush wiping blood from their bayonets and beckoning their next targets.

Some victims were asked if they wanted to be shot or bayoneted, a majority chose to be shot only to be bayoneted. Two wounded men found alive in Waitavalo Plantation homestead had been smeared in pig grease to be burned alive in the house. Requests for final cigarettes were refused. Some men prayed, some begged for their lives, others said cheerio to their mates.

They were covered in palm leaves and left to die. Incredibly, several men feigned death and survived to tell the story.

“The first stab knocked us down. The Japs stood over us stabbing madly. I received six wounds in the back, two just missing the spine, two more breaking ribs…

“As the Japanese were moving off, the man next to me groaned. One of the Japanese soldiers came running back and stabbed him once more. By this time I could hold my breath no longer. When I drew a deep breath the soldier heard me and inflicted four more bayonet wounds.

“The last thrust went through my ear into my mouth, severing an artery on the way. Seeing the blood gushing out of my mouth, he assumed that I was at last dead, he covered the three of us with coconut fronds and vine leaves and left.”

Cook somehow crawled off into the jungle, as did five other survivors, and eventually was evacuated from New Britain to Port Moresby with 156 soldiers, sailors and civilians aboard the overcrowded government yacht, the Laurabada.

Approximately 160 members of “Lark Force” were massacred. An estimated 1,053 of the troops and Rabaul residents who remained in the town or who were captured would eventually perish as prisoners when their prison ship, the Montevideo Maru, taking them to Hainan then occupied by Japan, was sunk by mistake by a US submarine ” USS Sturgeon”, off the Philippines on the 1st July 1942.

After the war some remains were retrieved, and buried at Rabaul’s beautiful Bita Paka war cemetery, but the bones of others are still in the jungle soil of a place whose name most Australians and British have never heard of.